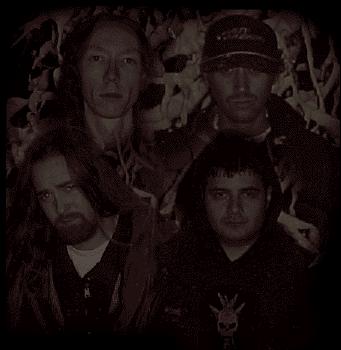 Hey there! First off I’ve gotta congratulate you on The Fifth Sun’s debut CD The Moment of Truth. It was definitely a long time in the making for you and the group. Do you feel that after over 10 years you’re pleased with the payoff?

Thanks. It was worth the wait from our standpoint mainly because we were able to release the type of album we could all be proud of. Could the album have been better, or are there things we wish we could change about it? Of course, but I think that is the case with any band and any album. We made the best record we could at the time and we are all proud of the end result.

Could you sum up in a nutshell the band's career from its formation in 1991 up until the release of the album?

Sure. We started out in 1991 under the name Consumed. We have had the same line-up other than bass wise. We are on our 3 bass player and this will be the last one! We are all from the same small town in Northern Minnesota, in 1994 we moved to Portland, Oregon in hopes of getting into a better situation for us as people and the band. We played all over Oregon and Washington. We played the Milwaukee Metalfest twice, recorded a 6 song EP, and appeared on a couple of comps. It became obvious to us that this route wasn't going to get us where we wanted to go so we regrouped in Minnesota and the rest as they say, is history.

Is it safe to say that the feedback you've received has been mostly positive?

Yeah, for the most part we have got nothing but great press from all over the world. The feedback we've received from the labels has been horseshit at best. That doesn't mean too much to us. We didn't need a label to record the album to start with. It's when other people like something you have done, that's when you know you've done something right. We made an album for ourselves and other people like it, that's a great feeling.

How was the arrangement made to record at Studio Fredman with Fredrik Nordstrom?

I set up recording with email and phone calls to Fredrik. We bought our plane tickets, purchased insurance, shipped our equipment, paid for our lodging, food, and paid for the recording and mastering of the album all out of our pockets. No other band has done anything like that before or after. That makes us unique in the world. We work harder than any other band. Too bad a record label can't see that.

What was the experience of working with Fredrik and recording The Moment of Truth like?

It was a great experience. To hear the ideas in our heads come to life. That was very rewarding. Fredrik pushed us to make the best album we could. I'm sure he will do the same when we return in September/October to record album #2.

Tell me how The Fifth Sun came together as a band.

Great story. Shawn Mattila (Guitar) and John Eggers (Drums), were jamming together. Lets keep in mind that Shawn was 15 at this time. I was in a Woodworking class with their then bass player. He said: "You should come jam with us some time". He mentioned they needed a singer, and I was like, "what kind of singer"? I know a singer, but he comes with a guitar. He's said man we are going to play this battle of the bands. So I went over to jam with them, and we've been jamming together ever since. That was in February of 1991. Seems like yesterday. At the same time, none of us ever dreamed we do what we have done.

What bands/artists have had the biggest influence on your music?

Death, Edge of Sanity, Testament, Entombed, Obituary, Slayer, Sepultura. On the metal side...I listen to a lot of classical music, all of us listen to different stuff...Pink Floyd, Roger Waters, Primus, Tool, Sting...and so on.

Can you name your current top five albums?

Who came up with the idea to name the band after the myth of The Fifth Sun?

I came up with the idea initially. After we thought about it for a while we all agreed, we needed a heavy-duty name for our heavy-duty ideas and music. The more we let it sink in, the more and more sense it made. Looking back on it I think it is the perfect name for us. Mysterious, dark, misunderstood, prophetic, other worldly....Yeah I love the name.

How extensive is the band's experience playing live?

We started out as a live band. Man I don't know. We've played hundreds of shows since 1991. As far as The Fifth Sun, we've played maybe two dozen times in the last 2 years. We really want to get on a tour. We are ready to play everywhere. Talk about an opening band that will blow your fucking doors off.

I read on your website that you opened for Hypocrisy and Soilwork last year. How did that go, playing with two bands of such high calibre?

It was okay, the show couldn't have happened without our equipment. Soilwork, Scar Culture, Kill Switch Engage had to use our equipment. Drums, Amps, etc. It was cool to help them all out, but it sucked to get our time cut short when they needed our stuff to play on. Never trust a promoter to stay true to his word. If he says I owe you big time, that means, you had better grab your ankles, because you are about to get fucked.

Has a record label ever shown interest in signing The Fifth Sun? I've read countless "how are they not signed?" comments on the Internet and would have to agree with them.

Thanks man that's very cool of you to say. I think the labels have black listed us, because we didn't follow their procedure, or their rules. I think they are worried that a band that takes so much pride in their music won't settle for anything but the best. In this instance they are right. We are controversial, we are up front, and we are honest. This scares away many labels that want to low ball you, or give you a half-asset deal. Don't worry, we will make them all look like morons very, very soon.

What comes next for the band? Is there a new album in the works? How about touring?

Yeah, we are going back to Sweden to Studio Fredman in September. We will be there for 2 months to make the follow up to TMOT. We have 5 songs done and 7 more that are in various stages of development...and I promise you the new material is absolutely crushing and catchier than hell. A couple of the song titles include: Leveling the Playing Field, In the Blink of an Eye, The Intimate Moments Have Been Lost, and I'll save the rest for a later date. Touring that depends on demand and if we sign with someone, license the album, or whatever may develop.

Well I guess that's a wrap for now. Thanks for your time. Myself and I'm sure many others will anxiously await more from The Fifth Sun!