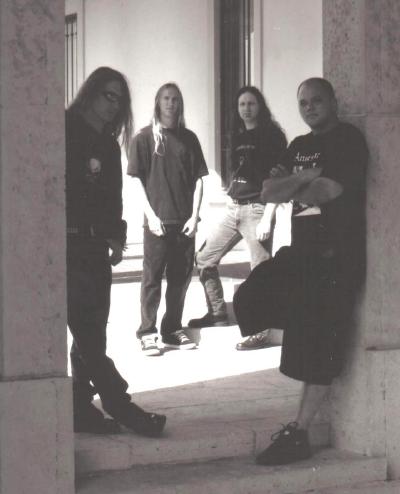 Hello and how are you doing?

You are presently working on your third album, but as of recently, you were not quite sure about a bass player. Have you had any luck in your search so that the next album can be finished soon?

Brian: Yes, I've located Mike Gaffney, a friend of mine, whom I grew up with. He's a fretless bass player who has a background in fusion. I'm really exited to hear the stuff he's going to do on our third CD.

What is the name of the new album?

Brian: Wizard's Keep is the working title for now.

What can we look forward to?

Robert: You can look forward to better production, more harmony guitars, an over the top drum sound and performance, as well as some very intense vocals.

Could you tell us a little about the lyrical concept for this album?

Brian: Rob wrote all our lyrics before. Denny is writing the lyrics now. I don't know what he's got in store.

What happened to your second guitar player and what are you looking for once you get ready to hire someone else on?

Robert: We’ve had two. Jennifer Page was with us in the beginning of Ancestor in 1998, but we had to part company because of artistic differences. And there was Will, who had to devote more time to school. Neither have recorded with us. We're looking for someone who has some knowledge of theory, loves metal and has a relaxed personality.

I assume, you're currently not gigging, but what are your plans for that?

Brian: We're independent now so we have no tour support. As soon as we get the right deal, I'm hoping that whoever we sign with will get us on a good tour as soon as possible.

How is the metal scene where you are?

Brian: Very small but the best as far as underground music is concerned. Tampa is still the capital of extreme metal.

Who decided on the name Ancestor and why did you choose it?

Robert: Brian came up with it one night. We like it because it has such a broad range of context, and it has a spiritual or eerie vibe.

Brian: In a word: reverence.

How would you describe your music and what would you say is most prominent?

Robert: It depends on the recording. The vocals were the loudest thing in the mix on the first CD. Return to Dust was more about the drums and guitars.

How do you see yourself as part of the metal scene?

Robert: Not so much in terms of the local metal scene, but I think we do play a small role in the broader sense 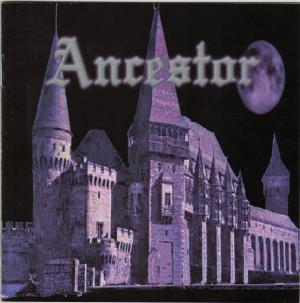 of what you’re asking. There are only a few places to play locally for any true metal band. We’ve stopped doing that because the local bars don’t even want to give us gas money to play. I’ll cite the infamous Brass Mugg incident as proof: "We played a show on a Tuesday at a Tampa bar that features metal, and we brought in about 20 people, one of whom was none other than the mighty Corpsegrinder."

It was a cool crowd and they were there to drink, if you know what I mean. They all paid to get in and the owner of the bar gave the money to a rap metal band from out of town that no one even wanted to see in the first place. But, in the worldwide metal arena, I think a few people know and enjoy what we do.

How do you get the inspiration for your writing?

Brian: Rob does all the writing and his guitar riffs are inspiring. He makes it ultra-easy to come up with drum parts.

Do you write together or separately?

Robert: Normally, I’ll come up with the guitar parts for the song, and then Brian will add his drumming in a very artistic, improvisational fashion. Once those elements become set in stone, we’ll add the vocals and give the song a name.

Who have been your role models?

Robert: Rhoads, Iommi, Hendrix, Lynch, Rocky George, Van Halen, K.K. and Glenn, Uli Roth, Ritchie Blackmore and Yngwie Malmsteen. I don’t know how much I sound like those guys, but there it is.

Robert: All the usual classic metal stuff, There’s a band called Aghora that’s pretty cool, and I like the new Halford. I like Buckethead, Ron Thal and Jason Becker, too.

When did you start playing and how old were you when you became interested in metal?

Robert: I became interested in dark, brooding music when I was about eight years old with the purchase of a Black Sabbath album, but I was sixteen before I could afford an electric guitar to start playing in a band.

Have you had sufficient support when you decided to form or be in a band?

Brian: Yes, always encouragement from friends and family, but no actual financial support.

Robert: Not really, LOL! It’s more like something that I’ve done in spite of what my parents might have preferred, or what my economic situation may have been at the time.

Besides Metal, what other types of music do you like?

Robert: Not much! Actually, I’ve been listening to some mp3s of Itzak Perlman. He’s done some of Paganinnis caprices and other solo stuff that I love to listen to. But, for the most part, it has to have shredding guitar for me to be interested, especially if it isn’t metal.

Brian: Besides metal, I like jam bands, jazz fusion, funk, Cajun slam grass - a la Leftover Salmon, a little reggae, maybe, classical, and anything not on the radio.

What kinds of things do you enjoy doing in your spare time?

Is anyone of you into collecting or is there any special drink, book, food or movie you would recommend?

Robert: If you haven’t seen Timecode 2000, you probably should rent it. It’s really cool.

I learned about you, like many other bands, on mp3.com. You have two songs off your album "Ancestor." Will you be offering more once the next album is out? That's interesting.

Robert: I’ve kind of lost faith in Mp3.com because they changed the number of plays we had from 2,500 to 999 and never changed it back. I just stopped trying to advertise there altogether. 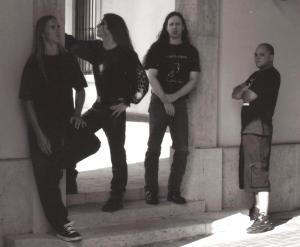 Yes, we’ll always have some of the newest and best stuff available on our website, full songs at 128 Mps. If there are fans out there that want more, all you have to do is ask and we’ll post it on the website.

How do you select your album covers? Who's got the final take on that?

Brian: Our artist is overseas, sends us the material, and we ok it as a group.

How is the music connected with the person you are?

Brian: It's an exact reflection of me. It's my life. It's my sanity. It's my testament, my will to live.

Robert: It’s a part of the person that I define myself as. Without it, I’d be very unhappy.

Have you been formally trained as musicians or are you self-taught?

Robert: I’ve had lots of private lessons; I’ve taken two college guitar classes with Dave Parman, who used to play for John Cougar(!) and is an excellent classical guitarist. I’m also taking a class in music theory at the moment.

How do you pick your instruments? Do you have any help?

Robert: I knew I wanted to play guitar the first time I heard "Over the Mountain."

Who maintains your website? I noticed you changed location. Will you be posting more pictures?

Which element do you think makes you unique or a little different from most other bands?

How do you see yourself as a role model to many young people who listen to and who get into your music?

Robert: I think that concept kind of flies over a lot of musician’s heads. There’s a definite responsibility that metal musicians have to at least try not influence the kids into doing stuff that’s going to hurt them.

Who do you feel has had the greatest impact on you personally (not Necessarily musically) when you were growing up?

Brian: My mother, she's a piano teacher and we have a unique bond. We're exactly alike in the way we think.

Are you working outside of the band? Do you have your own families?

Brian: Yes, I'm a trim carpenter. I have no children.

Is it difficult to divide your time?

Brian: Oh, yes. Definitely! I always make time for music. That's the most important thing in my life.

What are the future plans of your band?

Brian: We plan to take over the world. Many talented young musicians only dream of making it in a band but never succeed. Any words or advice to young bands and musicians?

Robert: Yes, first of all, don’t do drugs and [do] wear a condom. These two actions will increase your longevity, thereby giving you more time on Earth to accomplish your goals, and you’ll have more money to buy equipment and recording time.

Also, don’t get into music expecting to make any money at all. The odds are against it, especially now in this age of digital imaging and transfer.

But, if your goal is to make great music that you can be proud of for the rest of your life, then you can’t go wrong. The more that you practice recording and playing, the more people will want to listen to your music, and your popularity will grow.

Brian: Always keep new influences running through your CD player. Go to shows. Without good influences, you're nothing. You will get minimal quality influences from the radio. Seek out quality underground music.

God will help you through any struggles. As far as I'm concerned, if you love playing, you've already succeeded.

Any special greetings or last words to fans?