Dissident Aggressor, formed in 1987, were a relatively short-lived thrash metal band from Sacramento, CA, who drew attention from major labels like Warner Bros. and Chrysalis Records (among others) back in the day. They shared stages with bands

like Forbidden, Pantera, Death Angel, Armored Saint, etc. and the band was on its way to become a significant player in the world of thrash metal, but sometimes it isn't easy to balance things like family, full-time job, etc., with a life in music. Due to a number of different things, the band decided to call it a day in 1993.

In 2016, the band reformed to play a few shows and meet the huge demand from the fans and the snowball effect started from there, resulting in a deal with Divebomb Records to release the band's past material on CD for the first time.

As always, The Metal Crypt was keen on learning more about these metal warriors and the whole band answered our questions collectively, letting Dale Roberts be the spokesman for the band.

Dale: There is not much to do with this coronavirus, there's no live shows, no sporting events, it's like everyone is on pause. We've been offered a show with Exodus in February—we're hoping this all will pass by then.

The great news is that you guys have a demo compilation coming up on Divebomb Records this August, titled Death Beyond Darkness. I guess you are very stoked about this release, just like many fans of the band surely are?

Dale: This is great! We have some excited fans (and band members). There's been so much talk about D/A over the years, promoters have always asked us to play shows. People have never forgotten about us. We finally decided to play a few reunion shows and they went over huge. Shortly after that, Matt from Divebomb contacted us. This is such a great blast from the past for

our fans to see the artwork and read the story booklet of the beginning of Dissident Aggressor. This has been a long time coming and we can't wait to see it.

HOW IT ALL BEGAN

Before I get into specific details about this release, let's talk about the past, shall we? First off, could you shed some light on how you guys first met each other and formed Dissident Aggressor? What were the main catalysts there for you guys to start playing this type of "progressive and aggressive speed metal"?

Dale: Lloyd, Dennis, Darren Minter (former drummer) and Chris Brown (former bassist) were in a band called Hans Crypt. They opened for Dale's band XXX. Dale wanted to play heavier, more aggressive music and Hans Crypt played that style and was searching for a singer, so they contacted Dale and soon after they formed the initial lineup of D/A. This was at the time when the Bay area thrash scene was huge. We all had different influences that contributed to our sound; Pink Floyd, Judas Priest, Mercyful Fate, and thrash bands like Exodus, Testament, Metallica as well as fusion jazz.

When you recorded your first eight-track demo in 1990, did you feel that you had achieved something remarkable, music-wise?

Dale: Oh yes. We captured what we sounded like live. We recorded this demo in three days, with only two takes or less. Frank Hannon and Steve Fontano did a great job, and Prairie Sun Studios made us a great demo. We were confident that this demo was going to get us signed.

ABOUT PLAYING LIVE IN THE PAST

In 1990, you obviously got to play a good number of gigs. Did you notice your fan base growing at each gig?

Dale: Yes, our crowds continued to grow and our shows were getting bigger. We played a show in Sacramento at a club called The Boardwalk and the fire department came and shut it down because we were over capacity. It almost caused a riot

because the fans were so upset. We were also playing gigs with Pantera, Armored Saint, Primus, etc. We were invited to play the first annual Thrash Awards with Death Angel, Primus, and members of Metallica. Our fan base was getting huge.

Did you share stages with bands from different genres back in those days, like punk-orientated, crossover bands and such?

Dale: We had a few shows like that—with TSOL, for instance—but we mostly played in our own genre. Most of the clubs would have a night that was genre specific, like thrash, so we mostly played those types of shows.

Obviously, it was your second demo, released in 1992, that brought you more attention as a band. By this time, you had really shaped and refined your sound and the band got the attention it deserved. However, you did not manage to land a record deal that time. Did you promote the band to the labels that actively, this was before the Internet, of course, and I understand known labels like Chrysalis Records and Warner Bros. would have worked with the band?

Dale: We now know that we were not being properly promoted. Steve Clausman, our manager, did not shop us around to the independent labels, he was trying to go big. We wish that we would have been more involved back then, but we handled the music and he handled the business and we thought for sure that he was going to get us signed. If we had this to do over again, we would have handled things much differently.

Both of your demos were originally produced by Frank Hannon from Tesla. How did you end up choosing him to produce both demos?

Dale: There were a couple of reasons for working with Frank Hannon. Dale and Frank are friends, they went to school together, and even played in a band together when they were younger. Frank was also friends with Steve Clausman, who was also the manager of Frank's band City Kidd (that was their name before they became Tesla). Frank Hannon, Brian Wheat and Tommy Skeoch (most of Tesla) all wanted to produce D/A's demos, but we chose Frank.

What kind of setbacks killed the band in 1993? The usual stuff in life; families, jobs, etc.?

Dale: We all had families, young kids, jobs and lots of bills. We all decided to take a break. Time went by and before you knew it, the band pretty much just ended. Paul moved away and Dennis went back to school.

In 2016, something unexpected happened; Dissident Aggressor came back from the dead, after 23 long years. Did you feel you had some unfinished business?

Dale: It was unexpected. It started with some social media talk and Frank Hannon mentioned it as well. More and

more people starting to ask us to play and posted about it. We all talked and decided it would be great to get together and do this. Our kids would get to see us live and we felt this would be special, so we said yes to a reunion show.

After the reunion, you have continued to play a few well-selected shows. What was it like for you guys to climb on the stage again after so many years?

Dale: It was great to get back on stage again, we loved watching the pit! The crowd reacted like they used to and that made us want to do it again! There's no replacing the feeling you get from the volume and the energy of a live show.

Did you feel like your crowds were really receptive and supportive, hence playing live together again felt like a great thing to do?

Dale: The crowds went wild and we had a full house again. We hired Leading Edge Productions to make a professional video of "The Hill" for us. All of this led up to Matt from Divebomb Records contacting us. We're still getting several requests to play shows, lots of people are urging us to stay together and play again. We were even contacted by another label wanting to release our CD. It's great!

DEATH BEYOND DARKNESS IS COMING

Let's get back to your Death Beyond Darkness release. Could you tell me how your cooperation with Matt from Divebomb Records really started? Did he find your old material on the Internet or did you suggest he check out your band first, just to see if Dissident Aggressor would be right up his alley?

Dale: Not sure of the order in which this all happened, but Matt contacted D/A through our Facebook page, and even friended Paul at some point. Matt eventually emailed Dale and we got the ball rolling.

This release will contain many unseen photos of the band. Was it a tough job to go through your personal

history archives to find all those rare photos for this release? I mean, 27 years is a long time to not lose a lot of things...

Dale: Funny you ask—we were wondering where Matt got all the pictures—we sent him some and we're guessing he went to Facebook and the Internet and found more. Matt did a ton of work on this CD and an awesome job overall.

All the songs on this release have been completely digitally restored/remastered by Jamie King Audio. How did you find the guy for this job and how pleased would you say you are with the final result?

Dale: We haven't heard the final result yet but just seeing the time and work that Matt and his team have put forth on this project, we have no doubt that it will sound awesome. Jaime King Audio is Matt's engineer, with an awesome discography including progressive metal bands such as BTBAM and Scale the Summit. We sent Matt a CD that Dennis digitally remastered, and we can't wait what to hear what he has done to enhance our tracks.

It's a bit bittersweet thing to know that the band played its last gig on the Final Farewell tour in November 2018. Have you missed playing live after that at all?

Dale: Who knows what will happen after this CD release. We aren't counting anything out. Like we mentioned earlier, we've been asked to play a show with Exodus in February so hopefully this will come to fruition.

THE FUTURE IS OPEN

It's 2020 now, the year could have been much better, of course. Do you feel that you've gone a full circle now as far as unfinished business for Dissident Aggressor is concerned and there's nothing more that you want to do with the band?

Dale: Definitely not. You never know, the future is wide open. We'll have to weigh out the opportunities that may 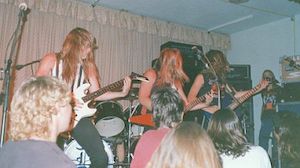 come our way. It would be cool to hit the road and do some shows, perhaps a European tour?

I sincerely want to thank you, Dale, for your time to make this interview happen and wish you all the best with your future endeavors, whatever they may be. Stay healthy, stay safe and thrash on! Anything else in your mind you'd like to say to conclude this interview properly?

Dale: Once again, we are fired up over all the hype. Hey, we even got someone from Finland wanting to interview us :) lol.

Thank you, Luxi, for taking your time to interview us—we appreciate it!